I'm back! The combination of a busy month of June and the fact that I do repeat recipes occasionally (gasp!) resulted in a week without blogging! After my last post, KK and I picked up takeout on Wednesday for Hoboken's Movies on the Pier (nevermind the fact that we didn't stay for the movie because we were not prepared for the chilly wind coming off the Hudson River); we noshed on apps on The Dubliner's rooftop bar for KK's birthday happy hour on Thursday; and then went on a birthday date on Friday at KK's favorite Mexican restaurant, Charrito's.

On Saturday, we stopped by Edison and then spent a few hours with KK's cousin and her 1-month old baby - what a cutie! Afterwards, we met my dad in Bradley Beach for summer vacation.  We've rented a beach house on Long Island's North Fork for the past few years, but decided to mix it up and try the Jersey Shore this year.  So far - so good.  Since Sunday was KK's actual birthday, we continued the birthday celebration by preparing one of his favorites, Skillet Chicken Parm, for dinner on Saturday.  Luckily, my dad brought a case of wine to choose from, so we paired it with a Wine Garage Pinot Noir.

Before KK and I were married, I had a separate Gmail label for "KK apartment" recipes.  Aptly named - these were recipes that I could prepare at his apartment.  I'll leave it to you to imagine the limited cookware and ingredients found in a bachelor's apartment! These stuffed peppers met the criteria perfectly - one skillet, rice (a staple in KK's apartment), and only a few additional ingredients which were easily obtainable across the street at D'Agostino's.  I deleted the "KK apartment" label when we got married and moved in together, thinking it would no longer be of any use.  Last night, however, we discussed resurrecting it because that recipe list does come in handy when we're travelling and trying to cook in unfamiliar kitchens!! When I last made these stuffed peppers, I remember them being a bit bland.  Several dashes of chili powder, cumin, garlic salt, and pepper solved that problem! As the turkey mixture cools, there will be some excess liquid in the pan.  There's no need to drain the skillet because the excess liquid will be absorbed by the rice.  I was only able to eat one of these giant peppers, but KK and my dad both managed to have two! Again pulling from the mixed case provided by my dad, we paired dinner with a bottle of 2007 Three Hoots Consilium Cabernet Sauvignon. 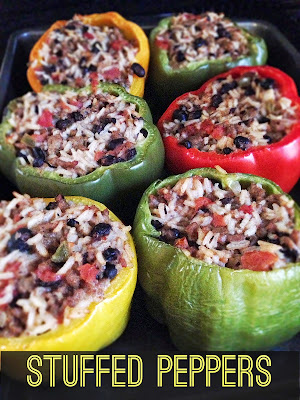 Directions
1. If it isn’t already prepared, cook rice according to package directions.

3. Brown ground turkey in a large skillet over medium-high heat.  Once cooked through, drain fat and add Rotel and rinsed black beans to the skillet.  Reduce heat to low and simmer for 5-10 minutes, until most of the liquid is absorbed.  Season mixture to taste with chili powder, cumin, salt, and pepper.  Remove turkey mixture from heat and let cool about 5 minutes.  Stir in cooked rice and cheese.

4. While the mixture simmers, prepare the peppers.  Cut off tops of peppers, remove stem and seeds.  If peppers do not stand up on their own, cut a thin slice off the bottom of each pepper so they stand upright.

6. Place stuffed peppers in a baking dish small enough to hold them snugly.  Cover with foil and bake for 40 minutes.  Remove foil, and bake an additional 10-15 minutes until tops are browned slightly and pepper skins are pierced easily with a fork.  Serve immediately, topping with salsa if desired.
at 9:56 PM