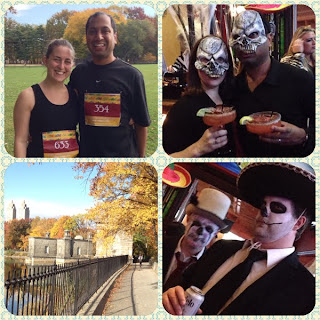 I hope everyone's feeling well rested, thanks to the extra hour of daylight savings sleep! I wasn't sure what time it was when I woke up because some of the clocks had changed, and others hadn't.  Does that happen to anyone else? :) I'm spending the day relaxing on the couch, enjoying a homemade blend of Dunkin' Donuts French vanilla and hazelnut coffee, and tracking my brave friends running the ING NYC Marathon.  Speaking of running - KK and I participated in a "race" yesterday in honor of my friend's 30th birthday.  She organized 30 of her friends and family for a 3.0 (like 30!) mile run.  With prizes at stake, KK left me behind, but it paid off because he was the winner! Surprisingly, I was the first female to finish - talk about a power couple! Central Park was packed with people enjoying the unexpectedly warm November weekend, so we picnicked on the Great Lawn after the run, enjoying bagels and Baked by Melissa cupcakes.  After whipping up some Tofu Pad Thai for dinner, we met some friends at Cadillac Cantina for Dia de Los Muertos festivities.  I'm not a fan of face paint, so we copped out and wore some skeleton masks.  Our friends, however, really got into it with spooky skeleton face paint and festive dresses. Yikes!

I've made stuffed peppers before, so I was intrigued with this method of cooking the peppers.  I decided these stuffed peppers needed to be precooked because there was no moisture in the pepper filling.  Without boiling the peppers, they might have taken a lot longer to cook.  KK was in charge of grocery shopping this week, so he picked out one pepper of each color – red, orange, yellow, and green – so we had quite a colorful dinner! I prepared the stuffed peppers when I got home from work, then left for a gym class.  KK put the peppers in the oven a little later so they would be done when I got home from the gym.  The timing couldn't have been more perfect! These could easily be turned into a vegetarian dish by omitting the pepperoni; one could even add additional veggies like mushrooms, olives, or eggplant, but don’t go too overboard, otherwise you’ll run out of room in the peppers! 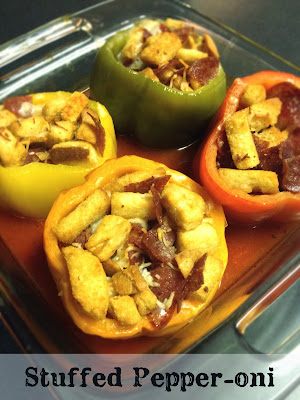 Directions
1. Preheat oven to 375.  Cut off tops of peppers and remove seeds; place peppers in a large pot.  Cover peppers with salted water; cover and bring to a boil, then reduce heat and simmer for 5 minutes. Drain peppers and set aside.

2. Meanwhile, place pepperoni in a skillet and fry over medium heat for about 5 minutes, stirring frequently.

3. Combine pepperoni, mozzarella cheese, and croutons in a bowl and toss together.

4. Pour marinara sauce into bottom of an 8x8 or 9x9 baking dish.  Stuff peppers with pepperoni-crouton mixture and place in the prepared baking dish.  Cover with tinfoil and bake for 35-40 minutes.  When ready to serve, scoop marinara sauce over peppers; top with Parmesan cheese if desired.
at 12:04 PM