Since this is only the second pie I’ve ever made, I didn't have a favorite pie crust recipe to use.  The timing of Mel’s Kitchen post about pies was perfect – she posted about them the same week I planned to bake a pie.  I recommend reading the pie crust instructions carefully before you get started because it’s important to work quickly once you start combining the ingredients.  The less hands-on time you can manage with the crust, the better crust you’ll end up with! Without a box grater in my kitchen, I used my mandolin for “grating” the frozen butter.  It was an excellent improvisation until I cut my thumb on the last tiny piece I was slicing.  Ouch! I was surprised to see sour cream on the list of ingredients, but apparently that’s quite common.  As instructed, I used regular sour cream instead of following my instinct to use a low fat or fat free version.  I don’t know what the sour cream adds to the crust, but I know it resulted in a crust that was easy to roll out and get into a pie plate, and it was perfectly flaky and delicious.  I think this will now be my go-to pie crust recipe!

My original intent was to make a lattice top pie using my Freezer Apple Pie Filling, but this recipe's crumb streusel looked too tasty and easy to pass up.  The crumb topping not only saved me time (didn’t have to make/roll out another pie crust), but it also added some sweetness to the pie.  After about an hour in the oven, the edges of my crust started to brown, but the apples weren’t cooked through.  If you’ve ever tried cutting aluminum foil strips and covering a pie crust in a hot pie dish – you know it’s a near impossible feat to accomplish without burning yourself or damaging the crimped crust.  A little Googling revealed an ingenious solution for this predicament! Following Real Simple’s instructions, I cut a 12-inch square of aluminum foil, folded it in half twice, and then cut a circle out from the center.  After unfolding the foil, I had a piece that covered the edges of my pie perfectly! This pie can be served warm or at room temperature.  I brought this pie to my brother-in-law’s house over the weekend, and I thought it was delicious at room temperature, but KK opted to heat his slice in the microwave for 20 seconds.  Diner’s choice! Enjoy! 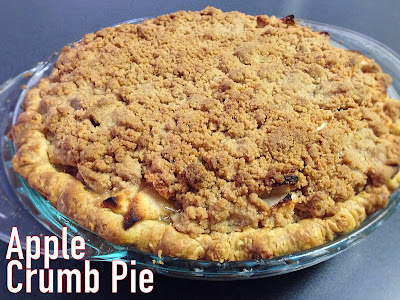 2. For the crust: Whisk together the flour, salt and sugar in a medium bowl.  Grate frozen butter into the dry ingredients.

3. Toss the butter-flour mixture with a fork until the pieces of butter are thoroughly coated.  Using the same fork, mix in the sour cream, mashing down any lumps in the mixture.  Do not overwork the dough, but use your hands to combine the dough and bring it into a rough ball.  The dough can either be used immediately, or stored in plastic wrap for 1-2 days in the refrigerator or one month in the freezer.

5. Using clean kitchen scissors, trim the crust edges, leaving ¼-inch around the sides.  Fold up the overhanging crust and crimp the edges with your fingers, or a fork.  Cover with plastic wrap and refrigerate for 30 minutes before baking.

6. Make the topping: Combine topping ingredients in a medium bowl and mix with a fork or your fingers until coarsely combined.

7. Preheat oven to 375°.  Fill pie crust with prepared/thawed apple slices; top with crumb mixture.  Place on a foil-lined baking sheet and bake for 1 hour 20 minutes.  Check pie after 1 hour; if crust has started to brown, cover edges with aluminum foil, and continue baking until apples are tender; crust should be golden brown, not burned.
at 3:39 PM