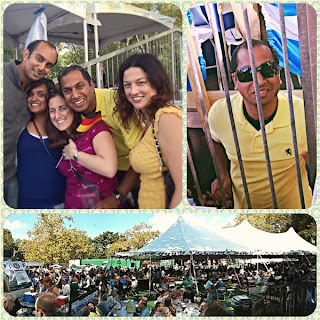 Yesterday, KK and I celebrated Germany, despite the fact that neither one of us is German (I do work at a German bank though!).  We went to the 56th German -American Steuben Parade in NYC, and then met up with KK's cousin and a few friends at Oktoberfest in Central Park.  We weren't quick enough to snag a seat under the main Oktoberfest tent, but we had an excellent view of the festivities from the Central Park Summer Stage bleachers.  A number of people demonstrated their German pride by donning traditional Lederhosen outfits.  We enjoyed pitchers of German beer while watching the 5th annual Masskrugstemmen National Championship.  According to Today.com:


Masskrugstemmen is a Bavarian feat of strength and endurance where contestants hold a 1-liter stein of beer (which weighs about 5 pounds) out in front of them at shoulder level for as long as they can. No beer can be spilled, no elbows can be bent, and extended arms must be kept parallel to the ground. The winner is the person who can keep their stein aloft the longest.

KK and I think Erik Totman of Las Vegas won the competition.  Unfortunately, the competition results aren't yet posted anywhere online! Nevertheless, we had a great time and I recommend anyone in the area get tickets for this great event next year (but watch out because it sells out quickly!).  Prost!

This meal, prepared last week, is a repeat recipe for Apt. 3D, but the first time I've prepared it since starting the blog. As I’ve mentioned before (here with peaches and here with apricots), I really like the combination of sweet fruit in a savory dish.  Maybe it specifically appeals to me because I have such a sweet tooth, but the dinner recipes I've cooked with fruit tend to top my list of favorites – this dish included! Make sure to get seedless grapes.  It would be rather unfortunate if you had to remove the seeds from 2 cups of grapes as you sliced them.  I used four-cheese chicken sausage, but feel free to swap that for spicy sausage or any other variety, but I suggest steering clear of smoked sausage because the flavor combination would not mesh well.  Strangely, the purple/red color of the grapes fades when they’re cooked, so it’s difficult to distinguish the grapes from the sausage in the picture below, but try to use your imagination.  The remaining steps in this recipe are simple and straightforward, just like many of Iowa Girl Eats’ dishes – no wonder she’s probably my favorite food blogger out there! Which food bloggers are your favorites? Who should I add to my Reader? 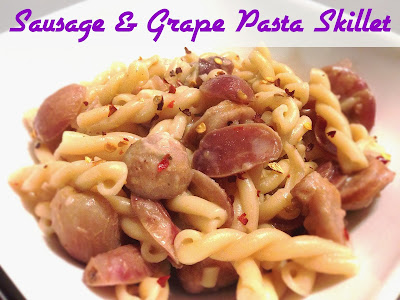 Directions
1. Cook pasta according to package directions. Drain and set aside.

2. Meanwhile, spray a large skillet with cooking spray and heat over medium.  Cook sausage links for 4 minutes, 1 minute per side.  Sausage will not be cooked through.  Remove from skillet and cut into ¼ inch slices.

3. Using the same skillet, heat olive oil over medium.  Add onions and garlic, season with salt and pepper, then sauté about 3 minutes, until onions are tender.  Add sausages, grapes, chicken broth, and red pepper flakes to the skillet; raise heat to high and simmer 8-10 minutes, or until sauce is slightly thickened.

4. Add cooked pasta and Parmesan cheese to the skillet.  Toss to combine and let mixture rest 5 minutes before serving to allow excess sauce to be absorbed by the pasta.
at 9:10 PM