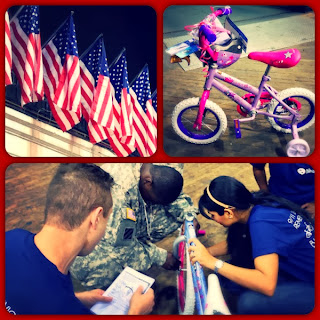 My coworkers and I participated in a 9/11 Day of Service and Remembrance Volunteer Event at the Lexington Armory.  Corporate volunteers and members of the USO joined together and assembled 400 bicycles which will be donated to children of active United States military families and wounded veterans.  Although we struggled getting the front wheel onto our first bike (don't worry - we laughed about it later), we manged to assemble 5 bikes in just a couple of hours.  The bikes were loaded onto trucks, and they will be transported to various military bases along the east coast.  Most notably, some of the bikes will go to children whose parents serve on the USS New York, a ship made of 6.8 tons of steel salvaged from the World Trade Center.  It was an incredibly rewarding morning, and I think we all wished it was a full day event.  If anything, this has inspired my coworkers and I to get more involved in community service events as a team!


This recipe is one of the strange ones that I was surprised to see in my recipe box – I must’ve been intrigued by the dish’s name, but did not read the list of ingredients.  Since I usually steer clear of mustard (I’m personally more of a ketchup fan), I probably wouldn’t have saved the recipe if I’d seen the Dijon mustard listed as an ingredient.  Nevertheless, KK convinced me to try this recipe last year and it was surprisingly delicious! It was so good, in fact, that this is the second or third time I’ve made it.  To lighten it up a little, I used evaporated milk (and a tad of skim milk because I ran out of the evaporated milk) instead of whipping cream.  Feel free to add more pecans if you want more crunch in your sauce.  I honestly didn’t measure the pecans this time around because I simply finished the open bag I had on hand.  I served this with a side salad and Rice-a-Roni; mixing some of the pecan sauce into the rice to makes it extra tasty! 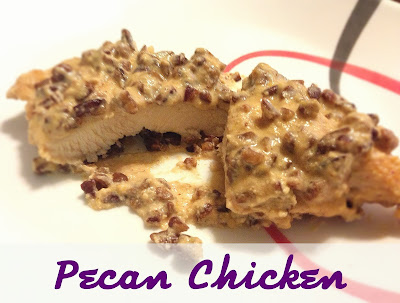 Directions
1. Pound chicken to an even thickness, about ½-inch thick; season both sides with salt and pepper.

2. To toast the pecans, heat oven or toaster oven to 325° and spread pecans in a single layer on a baking sheet.  Cook for 5-10 minutes, stirring the pecans once or twice, until fragrant.  Watch closely to ensure pecans don't burn.

3. Meanwhile, heat olive oil in a large skillet over medium-high.  Cook chicken 3-4 minutes per side.  Chicken will not be cooked through; remove from skillet and set aside.

4. Reduce heat to medium, add evaporated milk,  marmalade, and mustard to the skillet and stir to combine.  Return chicken to skillet, cover with pecans, and cook 8-10 minutes until sauce thickens and chicken is cooked through.
at 3:23 PM