It's apparently pasta week in Apt. 3D! In all fairness, we hit up the discount produce section on Saturday, and scored 2 pints of cherry tomatoes for $1 that we needed to use sooner rather than later.  KK went off his original menu plan to accommodate the spontaneous purchase.

This recipe calls for the chicken to be marinated.  If time permits, I recommend you marinate overnight to really get the herb flavors infused into the chicken, otherwise leave the chicken in the marinade for at least 20 minutes before cooking it.

The only major change I made to the original recipe relates to the tomatoes.  The Goddess of Scrumptiousness version of the recipe calls for the tomatoes to be added during the last step, but I don't like raw tomatoes unless they're in Caprese salad.  Strange, I know.  By adding the tomatoes in the beginning,  they were sauteed perfectly. 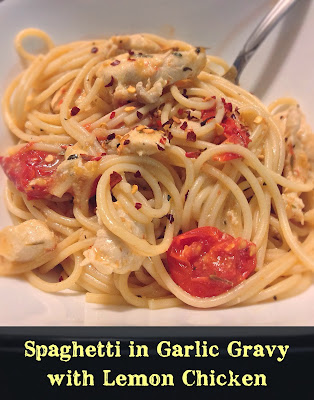 Marinade Directions
1. Add all the marinade ingredients into the chicken and marinate for at least 20 minutes, it it's best if you marinate overnight in the fridge.

2. Meanwhile, saute the marinated chicken in extra virgin olive oil over medium high heat until cooked (about 4-5 minutes), then set aside.

3. After finishing the chicken, saute the butter over medium heat in the same pan.

4. Add garlic and tomatoes.  Stir frequently and saute until fragrant, about a minute.

5. Stir in the flour and cook for another minute.

6. Add chicken broth and simmer gravy until thickened, about 10 minutes. Stir in basil, and season with salt and pepper to taste.