TGIF and happy belated Halloween! KK and I opted to lay low last night, cooking up some Cajun Ranch Chicken Pasta and watching football.  Sadly, we didn't have any trick-or-treaters this year... guess the few kids in our building found loot elsewhere.  Instead of celebrating Halloween the traditional way, we're celebrating Dia de Los Muertos on Saturday at Cadallic Cantina with a few friends.  Today, KK is on a mission to find us some skeleton-faced masks so we can celebrate in style! Before the celebrations begin tomorrow evening, KK and I are running a 5K for a friend's birthday in Central Park.  It'll be my first time running in Central Park, so I am kind of looking forward to the scenery around the reservoir.  Even though getting up early and running aren't normally on my list of favorite things to do, it's just one of those things we'll happily do for our friends!

We had a menu mix-up earlier this week! KK had planned to make Cilantro Lime Chicken Tacos, but he didn’t realize cilantro couldn’t be substituted for basil pesto.  Whoops! KK had this peanut noodle dish on the menu for later in the week, so we bumped it up a few days and added the chicken that was already thawing in the refrigerator.  Crisis averted! If you don’t have thin spaghetti, you can use regular noodles, or any sort of asian noodles – rice, udon, or soba – anything works! The sauce was a strange mix of salty and sweet, but I really enjoyed it.  We also opted to double the sauce which turned out to be a good decision.  Spiced up with some Sriracha on top, KK and I both went back for seconds, and I demolished the leftovers for lunch earlier this week.  Along with Tofu Pad Thai, I think this will be one of our go-to meals when the pantry is looking bare or I don’t have a lot of time/energy to put into dinner!

Soy Peanut Noodles
Adapted from The Comfort of Cooking 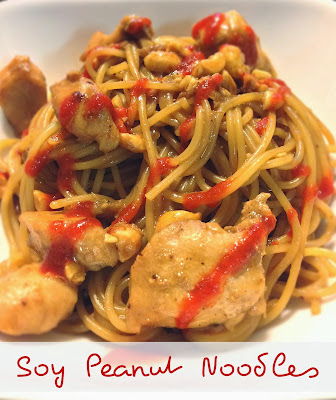 Directions
1. Cook spaghetti according to package directions.  Drain and set aside.

4. Add spaghetti, sauce, and peanuts to the skillet of cooked chicken.  Toss with tongs to coat and serve immediately.
at 11:05 AM