KK and I have not properly celebrated Halloween together since 2010.  We were on vacation in 2011 (Spain) and 2012 (Thailand), and this year we were just lame (masks for Dia de Los Muertos don't exactly count as proper costumes).  That being said, I've started gathering supplies for a costume to wear at my friend's annual Ugly Sweater Holiday party.  Instead of wearing the same old, ugly sweater, I'm getting crafty.  Stay tuned for the reveal next month! In other news, KK and I are visiting our twin niece and nephew this weekend and I could not be more excited!!! They're two months old now, and are apparently growing like crazy.  I'm going to use some apples from apple picking to make a pie for our visit (more for my brother and sister-in-law than the twins).  Since I don't have an apple pie post ready for you yet, I'm posting about a different type of pie instead!

Yum, yum, yum! I made these cookies for giant Jenga night a few weeks ago, and there were plenty leftover for us to enjoy while tailgating at the Jets-Pats game.  Having a hands-free electric mixer, such as a Kitchen Aid, really made this recipe easier.  I love being able to toss ingredients into the mixer’s bowl, and then walk away for a few minutes while the mixture combines.  This is the first time I’ve seen a cookie recipe that requires the baking soda to be dissolved in hot water before adding it to the rest of the ingredients.  After some quick Googling, I learned that dissolving baking soda helps get it evenly distributed in the dough and gets it activated before putting the cookies in the oven.   To  be honest, I don’t really understand why you’d want the baking soda activated early, but I do know that the cookies ended up flattening evenly which led to better sandwiches! My gelatin was very old, so the filling mixture took almost an hour to set; I tried filling the cookies before it set but ended up with a runny mess, so it’s worth the wait to get perfect cookies! Use as much or as little filling as you please; I opted to keep mine fairly thin in an effort to emulate Little Debbie’s Oatmeal Crème Pies.  I was a bit worried because the cookies were quite hard after they cooled, but they softened from the moisture of the marshmallow filling and turned out perfectly! 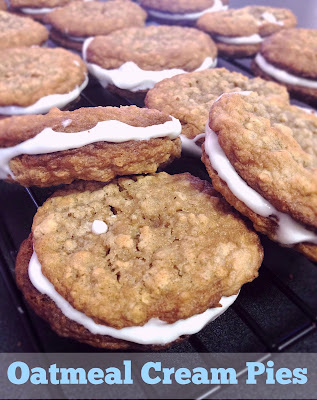 3. In a separate bowl, sift together salt, flour, and baking powder; add to the creamed mixture, along with cinnamon and oats.  Mix well.

4. Using the now empty small bowl, combine baking soda and boiling water, then pour into the rest of the batter. Again, mix well.

5. Drop by the tablespoon onto prepared baking sheets about 2 inches apart.  Bake until cookies are firm and begin to turn golden brown around the edges, 5-8 minutes.  Cool cookies completely on a wire rack.

Filling Directions
1. In a small bowl, sprinkle the gelatin over ⅓ cup cold water. Let stand, stirring once or twice until the gelatin softens, about 5 minutes.

2. In a 2-quart saucepan on medium-high heat, combine sugar, corn syrup, and ¼ cup hot water until blended.  Raise heat to high and bring mixture to a full boil, then stir at full boil for 30 seconds.  Remove from heat, and stir in gelatin mixture until it fully dissolves.

3. Transfer mixture to the Kitchen Aid bowl; stir in vanilla and beat for 20 seconds at medium speed.  Gradually increase speed to high and mix for 5 minutes, until mixture is stiffened, white, and fluffy.  Reduce speed to low and gradually add the powdered sugar.  Add shortening and beat until completely smooth.

4. Allow the filling mixture to thicken 10-15 minutes, or until it sets, before assembling the cookie sandwiches.
at 7:53 PM