100 posts! Woo!! 3D Dinners is about 8 months old, and I'm impressed that I've been able to keep it up relatively consistently for this long.  Of course, I wouldn't have been able to do it without help from my trusty sous chef, blog editor, and husband extraordinaire.  And of course you readers! Thanks so much for following me!

My favorite school lunch as a child was breakfast-for-lunch.  The other night, KK and I had breakfast-for-dinner instead.  This quiche could really be served for any meal - breakfast, lunch, brunch, or dinner.  It reminds me a bit of KK's favorite Corn, Pesto, and Tomato Pizza, but with less pesto and more egg.  I made the pie dough around lunchtime, so it chilled in the fridge for about 5 hours.  I don't have much experience with pie crusts, so I don't know if there's any benefit for chilling it longer.  Instead of using only all-purpose flour, I used half whole wheat flour.  If you do the same, you'll need to add a little more water to get the dough to the right consistency.   The addition of vermouth gives the caramelized onions a subtle herb/citrus flavor which I quite like.  Although there was already a good portion of vegetables in the quiche, I served it with a spinach salad on the side. 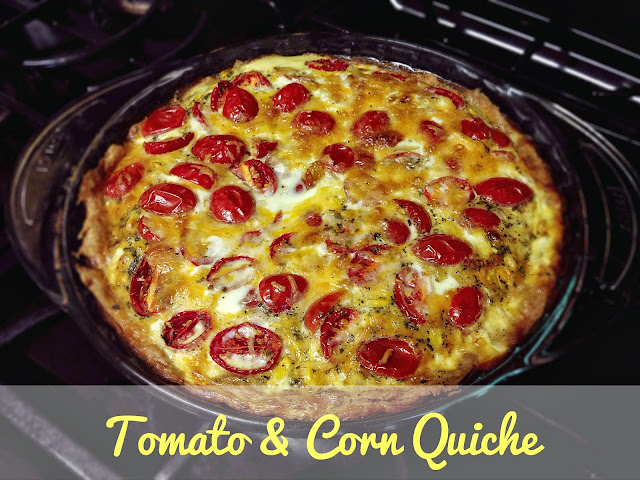 Directions
1. Make the pie crust first.  Mix flour and salt in food processor; add diced butter and pulse until a coarse mixture forms.  Gradually blend in water until dough begins to clump.  Using your hands, form dough into a ball, flatten into a disk, wrap in plastic, and chill at least 2 hours or overnight.

2. When ready to prepare the quiche, preheat oven to 450.  Lightly dust working surface with flour; using a rolling pin, roll dough to fit a 9-inch pie dish.  Place crust into dish, and press it evenly into the bottom and sides.  Prick the bottom of the crust with a fork several times.

3. Bake crust for about 10 minutes, until it turns golden brown.

4. While the crust bakes, heat olive oil in a large nonstick skillet over medium heat.  Add onions and season with salt and pepper.  Caramelize onions, stirring occasionally, until they are soft and golden brown, about 25 minutes.  For added flavor, mix in cooking wine and stir until all liquid is evaporated.  If necessary, reduce heat to prevent onions from burning.

5. When the crust is finished, reduce oven heat to 350.  Spread caramelized onions over the bottom of the crust.  Toss tomatoes, corn, and basil in a medium bowl, and then spread over the onions.

6.  Using the same bowl, whisk together eggs, milk, and cheese.  Season with salt and pepper, and pour over the filling in the pie dish.

7. Bake 45-60 minutes, until the center is set and the top is golden brown.  Cover edges of the dish with tin foil if the pie crust begins to burn before the quiche is finished cooking.  Cool slightly before serving.
at 4:02 PM