Looks like 3DDinners sort of tapered out there about 5 months ago – whoops! I don’t have a legitimate excuse for the lack of posts... just busy at work and unmotivated to spend any more time than necessary at the computer, but KK and I have now started repeating recipes that are not on the blog.  We realized that the blog was an excellent space to collect modifications to recipes saved on Pinterest and in Gmail, so I’m going to give it another try! I probably won’t spend as much time fancifying the pictures or recapping photos (at least for now), but at least you’ll be able to see what we’re eating for dinner in Apt. 3D!

Last night we had a vegan meal.  Well, it was a vegan recipe, but then KK decided we should use a jar of Italian Sausage with Peppers and Onions Classico sauce instead of something truly veggie-friendly.  I used an eggplant straight from my mother-in-law's garden.  It was 14 oz., and I managed to make 19 "meatballs" from it.  Before rolling out the "meatballs," I decided they needed additional seasoning, so I added more crushed red pepper flakes and oregano. 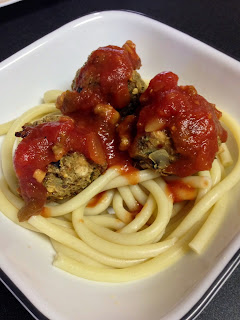 2. Add remaining ½ Tbsp oil to the skillet.  Cook onion and garlic over medium heat until translucent, 3 to 5 minutes.  Add onion mixture to the food processor, along with the drained beans and parsley.  Pulse mixture until well combined and chopped; be careful not to puree the mixture.

3. Preheat the oven to 375°; spray a large rimmed baking sheet with cooking spray and set aside.

4. Add breadcrumbs and red pepper flakes to the eggplant/bean/onion mixture; stir until just combined.  Season to taste with additional (garlic) salt and pepper.  Roll out 12-20 “meatballs,” 1 to 2-inches in diameter.  Place on prepared baking sheet and cook until firm and slightly browned, about 25-30 minutes.

5. Meanwhile, heat water and cook pasta according to package directions.  If desired, warm marinara sauce in a medium saucepan.  Serve cooked “meatballs” over pasta with marinara sauce.
at 8:46 PM