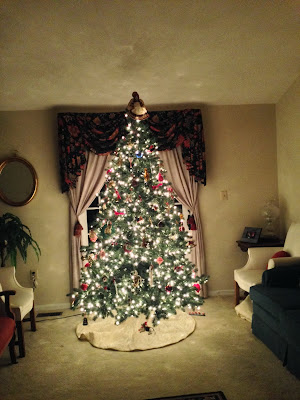 Where has the time gone? Last week flew by – probably because I had most of the week off from work, and it was spent relaxing with family in Hilton Head.  I hope everyone had a wonderful Thanksgiving and a successful Black Friday! With a Verizon contract renewal, KK and my dad got a free Samsung Galaxy S4 from Best Buy.  I wasn’t in the market for any new electronics, but I was especially excited to snag the last bag of Gingerbread M&M’s which are sold exclusively at WalMart! I also scored a new purse from the Coach outlet; unfortunately, I won’t get my hands on it until Christmas when Santa puts it under the tree.  Speaking of the tree, we drove from Hilton Head to Northern Virginia on Saturday and spent the day at my dad’s house before heading back to Hoboken.  Since we had some time to kill, I decided it was time to decorate the Christmas tree! Isn’t she a beauty!? It’s hard to believe that Christmas is just over 3 weeks away, but I’m certainly looking forward to spending more time with family in the weeks to come!

Since I’ve made taco seasoning before, KK had me whip up another batch of it for this meal.  He also decided that we’d give homemade taco sauce a try as well.  We found a recipe on The Make Your Own Zone, combined all the ingredients in a lidded bowl, spiced it up with an additional heaping ½ teaspoon chili powder, refrigerated it (covered) for a few hours to let the flavors blend together, and then nuked it in the microwave for 30 seconds when I was ready to use it.  It was delicious.  We'll probably never buy canned taco sauce again.  Ok - that's clearly an exaggeration, but now we have the option to make our own in a pinch, rather than running out to the store if we don't have any in stock! I used about 1½ cups of cheese to top the shells; we probably could've done with a little less cheese, but KK convinced me to finish the open package rather than leave such a small amount unused.  We were, after all, on our way out of town for Thanksgiving! My usual complaint about stuffed shells is the lack of sauce and often times they come out of the oven looking very dry.  However, that wasn’t the case with these stuffed shells! There was a nice layer of salsa and taco sauce on the bottom of the pan which KK and I used to top off our shells.  With that being said, we’ll probably need to add salsa when we reheat the leftovers, but that’s to be expected as the shells will absorb the excess liquid in the refrigerator. 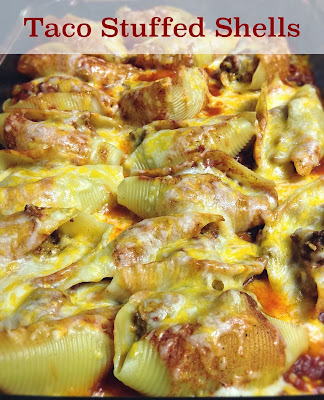 Directions:
1. Boil water in a large pot and cook shells according to package directions.  Preheat oven to 350° when pasta water boils.  Once pasta is done, drain and rinse with cold water.

2. Meanwhile, heat a large skillet over high heat.  Add ground turkey and taco seasoning to the skillet, and cook until turkey is no longer pink, about 5-8 minutes.  Stir in cream cheese; remove mixture from heat once cheese is completely melted.  Set aside and cool.

3. Spray a 9x13 baking dish with cooking spray; coat bottom of the dish with salsa.  Stuff each shell with the meat mixture, and place shells open-side up in the prepared dish.  Cover shells with taco sauce.

4. Cover baking dish with tin foil and bake for 20-25 minutes; sauce will be bubbling.  Cover shells with shredded cheese and bake uncovered for an additional 5-10 minutes, until cheese melts.  If desired, serve with sour cream or additional salsa.
at 11:00 AM

Email ThisBlogThis!Share to TwitterShare to FacebookShare to Pinterest
Labels: Mexican