Happy Hump Day! We're having a pretty slow week here in Apt. 3D, but it's a welcome lull because we've been on the go since getting home from vacation.   Since it's such a quiet week, I'll jump right into the food portion of this post rather than bore you with mundane stories from the week - eye doctor's appointment, cleaning, laundry... boring!!!

I love Indian food! One of these days I’m going to eat at Karma Kafe in Hoboken, but in the meantime I’m lucky enough to be spoiled by my mother-in-law and all of KK’s aunties who are all amazing cooks.  I’ve started to dabble with cooking Indian in the kitchen, including the Masala Pizza I made in early September, so it was only appropriate for me to try a more traditional spin of Tikka Masala.  I added the marinade ingredients directly into the Ziploc bag I was using to thaw the chicken, squished the bag around to ensure everything was thoroughly coated, and then let the chicken marinate for about 4 hours in the refrigerator.  If you have difficulty draining the excess marinade, don’t fret – it will simply add to the flavor of the sauce if you leave it in.  Watch the sauce as it thickens so it doesn’t start to boil and splatter all over your stovetop.  I chose to cook up some rice and serve the Chicken Tikka Masala mixed in with the rice.  Alternatively, serve this by itself or with naan. 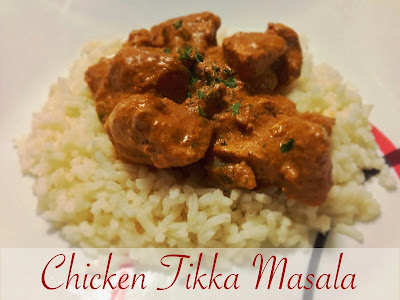 2. After the chicken is done cooking, heat vegetable oil in the same skillet over medium heat.  Sauté garlic and jalapeno for 1 minute; season with cumin, paprika, and salt.  Pour in tomato sauce and light cream.  Reduce heat to low and simmer 20 minutes, until sauce thickens.  Add cooked chicken to the sauce, and simmer for 10 additional minutes.  Serve warm.
at 8:32 PM